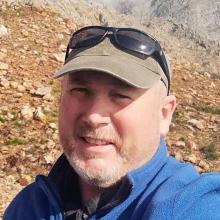 As a native of South Africa, how did you first come to learn of Camp Sea Gull and make your way here?
I was studying nature conservation and managing a big game farm in Botswana at the time and wanted to go back to South Africa to do environmental education. Through a friend of a friend, I met Jill Shumate Thompson, former Director at Seafarer, who recommended checking out Sea Gull and its extended season programming. A couple of months later we landed in New Bern and that’s where our journey started.

How has the culture of Sea Gull and Seafarer translated across the globe at Camp Nelu?
You guys have really paved the road for the success that I’ve been having. We have about 12,000 kids a year that come through our gates. We get to leave just a little footprint in their lives because we only have them for three days and two nights. We come down to the kids’ level to have a really big impact on them. The things that I’ve learned from Sea Gull and Seafarer have prepared us to connect with the kids very quickly in such a short period of time. Sea Gull and Seafarer has played the biggest part in my preparation for the work of my life and the path that I’m walking.

What are the biggest similarities and differences between the camps?
Kids are kids. Their needs are the same, they want affirmation, they want to have a good time, and they want to feel safe. The way we present the activities and the philosophies are exactly the same way you do in the states. We experience the same issues. We just want love and to see a friendly smile on your face.

Where we are now in a game reserve so we have lions, we have buffalo, it’s a proper game farm. We have four lions, there are two hyenas, just a huge variety of wild animals that roam free around us. We fall asleep and wake up with the lions roaring. When they get too friendly with us we chase them away. When there isn’t anyone staying in the cabins and we leave the windows open the baboons and the monkeys will raid the kitchens.

Can you share a goal you have for the future of Camp Nelu?
Something I would really like to push for is how we can have an exchange program by sending some of our counselors your way. It would enhance our work and I remember when I was there, people really enjoyed us being international staff, we felt like we were treated like celebrities. Just the impact that the international staff has with the kids, getting to know not just different cultures but they can learn so much from the counselors.