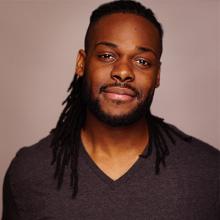 Years as a Camper: 2

Camp taught me the value in the marriage of hard work & patience and that I never had to do it alone. My entire career is based upon that relationship; it could take me months of going back and forth to see the same director for the same show before they offer me the job. In some instances, I still don’t get the gig, but I move on to the next thing and continue to build my craft while growing and learning along the way. Everything is a process, and I really enjoy making friends with the people with whom I share these experiences.

I had two goals my first year at Camp: to become a Tiger Shark, and to achieve the level of “Captain” in Powerboating. I didn’t realize just how hard it would be, and often found myself frustrated and giving up. It would take a simple pep talk and an icee from Karen Pruett in the Health Center to get to me back up and at it. We figured out that I was feeling overwhelmed because I wasn’t enjoying the little moments, and I was trying to do it all by myself. She had a keen way of breaking stuff down to little stubborn me. She was right, of course, and by the second year, I reached my goals and made some meaningful connections along the way. I know life isn’t this simple, but it’s a darn good blueprint!

Hayes Permar. Hands down.  I never had the chance to have him as my Head Counselor (he was the Land Chief my year as a Camp IV Gator), but the energy and love that he had for Camp was infectious and remained consistent. I definitely thought he was odd at first, because how could ANYONE be this happy all the time, but the man is a gem! There was one time where we just sat in the rocking chairs outside of the Mess Hall, eating ice cream and shooting the breeze, and at some point, the thought “I want to be cool just like him” passed. I have yet to reach that level of cool, but I did get the opportunity to work with Hayes outside of Camp years later, and I truly consider myself lucky to be able to call him a friend.

Favorite Camp food: CHICKEN. TENDERS. I would eat myself SICK!!!

What would be your intro song for every time you walked into a room?

“Takin’ It To The Streets” by the Doobie Brothers

Who is your hero?

The late Dr. Joseph A. Moylan. His ambition and determination to provide an opportunity for our young minorities was so admirable! I wouldn’t know Camp Sea Gull without him.