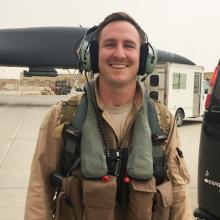 Years as a Camper: My Dad worked at Camp my whole life but I was there for three years as a camper and one as a Trainee.

Years as a Staff Member/Position(s) held: I was on staff for four years, all as a Lifeguard.  In my final year I was Assistant Lake Chief and the Red Cross Lifeguarding Instructor.

How do the values or skills learned at Camp show up in your everyday work or personal life?
The values you learn at Camp are directly in line with the core values of the Air Force.  It’s all about honesty, integrity, and helping others.  It is all about doing the right thing when no one is looking.  I also learned about working towards goals and creating teams that help me plan and fly missions every day at work.  The years I spent lifeguarding and the friendships I made at the Lake taught me about hard work.  Sometimes I’ll have a long day or a bad day and I’ll still be on the Air Force Base when Taps plays.  I love when that happens because it helps me reflect on all the good things that happened and reminds me of Camp.

Jon Vance had a huge impact on my life.  He was working at Camp when I was still too young to leave the Doctor’s quarters without my parents but he knew me from that time until I was old enough to be a trainee.  As Staff Director, he mentored us through that program and taught us what it was like to have the responsibility of being a counselor.  He treated us like adults when in our minds we were still kids and we loved him for that.  I remember going to him with a problem and he dropped everything to help me.  He is the reason I came back the next year and I strive every day to build those relationships with people I meet, just like Jon Vance showed me.

What are your plans after your career in the Air Force?

I just finished an internship with a small Real Estate Developer in Denver.  I really like the industry.  The company that I interned for specifically does sustainable development, which means they build extremely energy-efficient buildings and focus on things like air quality and solar power.  After my charity ride I'd like to go back to work for them and possibly get a master's degree in sustainable construction.

Tell us about your bike ride across the country?

For my last few years in the Air Force I was a member of the Air Force Cycling Team.  The team is used as a recruiting tool and a way for cyclists in the Air Force to get together and ride.  I did two 500+ mile, weeklong rides with the team.  Those rides convinced me that I could ride long distances and put the idea of a cross-country ride in my head.  Now that I'm out of the Air Force I finally have the free time to commit to an extremely long ride.  The route I chose starts in San Francisco at the Golden Gate Bridge and ends in Charleston, South Carolina.  The route is just over 3000 miles.  I'll be riding alone and completely self-supported.  Although I have planned the route so that I'll have many friends to see along the way.  One benefit of the Air Force is having friends stationed all across the country.

How did you choose this charity to ride for?

During my service, I saw many of my friends affected by mental health issues due to the stressors of military service.  Military life is extremely difficult and many veterans struggle to keep their heads above water during and after service.  This ride is about bringing awareness to the fact that to the rate of suicide in the veteran community in nearly twice that of the general population.  Mission 22 is a fantastic organization that is dedicated to healing America’s veterans. They offer treatment for Post-Traumatic Stress and Traumatic Brain Injury, substance abuse and all of the issues veterans are facing today.  I contacted them and they agreed to sponsor my ride.  People wanting to support can donate directly to Mission 22 via my website!

Where is the coolest place you have visited in the military?
It’s not a place but a speed.  My first time going faster than the speed of sound was at about 25,000 feet above the Nevada desert.

What was your favorite Camp activity?
I still love sailing, but the Swim Lake holds a special place in my heart.

What are you watching on Netflix?
Stranger Things

What do you miss about Camp?
Everything. But I think mostly I miss how simple and fun life by the Neuse was.